Curtis Scott was sentenced to 22 years in prison Friday after beating his former girlfriend in 2019. (Photo: Cameron Knight/The Enquirer)

She asked the judge to give her former boyfriend one year in prison for every hour she was trapped in a bathroom hiding from him. She was there for 16 hours after he attacked her.

On Friday, Curtis Scott was sentenced to that and more. He will serve 19 years in prison for felonious assault, kidnapping and abduction, plus another three years for a weapons charge.

In an incident caught by surveillance cameras, Scott brutally beat his then-girlfriend Brenda Luper in the hallway of a West End apartment in July 2019.

The video shows him punching her in the face, dragging her by her hair, stomping on her head and slamming her body on the concrete for eight minutes.

After she was dragged back to the apartment, she hid in a bathroom eventually clawing her way through a wall to get help, prosecutors said.

“On July 11 when I was rescued, a piece of me never left the bathroom,” Luper told Judge Jody Luebbers Friday.

[ The Enquirer is dedicated to local journalism. We can’t do it without your help. Please consider a subscription to Cincinnati.com ]

Wearing large earrings emblazed with the word “Survivor,” Luper said at first, she wasn’t sure he deserved a long sentence despite causing “the worst day of my life.”

“Even though I know that he had just tried to kill me, the inner person inside of me wouldn’t allow me to hate him enough for him to go to jail for a long time,” Luper said. “After coming here today and hearing him lie about what happened that night, it just reminded me who he really is.”

She called Scott a monster, a narcissist and “completely delusional” because he doesn’t think anything is wrong with him. 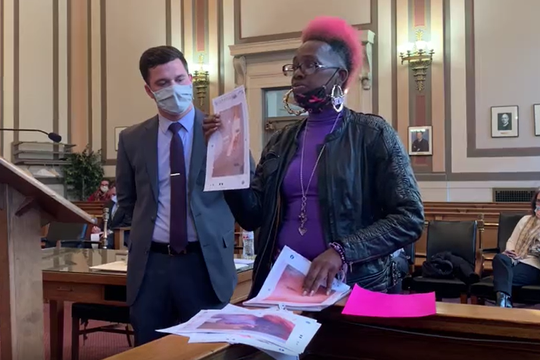 Brenda Luper shows images of her injuries caused by an attack by her former boyfriend. (Photo: Cameron Knight/The Enquirer)

“He called me every day for two weeks while he eluded the police and never said sorry,” Luper said. “I believe he may be sorry now, but he’s only sorry because he didn’t finish the job.”

Despite speaking with a Hamilton County deputy the night of the attack and a Cincinnati police SWAT team responding to the apartment, Scott managed to elude capture and was on the run for three weeks before his arrest, the judge said.

Judge Luebbers said this caused Luper to be victimized twice because law enforcement did not handle the situation correctly and allowed Scott to get away.

Scott also spoke in court Friday saying that it was Luper who started the fight by insulting his recently deceased mother.

He said that night he wasn’t himself that he is not a violent person.

After he spoke, prosecutors read his criminal history which included convictions for multiple violent offenses, at least a decade of prison time for drug charges and seven domestic abuse cases that had been dismissed over the years.

After Scott and Luper had spoken, Luebbers said watching the video during the trial caused her to jump out of her chair due to its disturbing nature.

“You’re a smooth talker, man. You let that sheriff’s deputy let you walk away from that scene,” Luebbers said. “You cannot smooth talk me.”

The judge determined that two the charges should merged, but issued the maximum sentence for all the remaining charges.

The judge commended Luper calling her a survivor and a warrior. Luebbers said she stuck with the prosecution despite threats from Scott and contact from his friends pushing her to take it easy on him.

“You have saved other people from being harmed by him,” the judge said.

During her statement in court, Luper read a poem she wrote while she was still recovering from her injuries. It listed many reasons why she hated Scott, but the last line says: “But I love you for waking me up.”

By the time Scott is released from prison, he will be over the age of 65. He will be required to register as a violent offender where ever he lives following his release.