When Solano County approved a new California law that would legalize home-based kitchen operations in April, it seemed like Cheska Kistner’s plans to open a restaurant in her Benicia home would finally come to fruition. The measure, California’s AB 626, allows for what are known as microenterprise food businesses, which Alameda County also made inroads toward legalizing yesterday. But no Bay Area county has yet fully implemented the 2018 law, leaving entrepreneurs like Kistner in limbo.

Under AB 626, cooks can legally sell up to 30 meals a day or 60 per week from their homes when their counties opt in and they have received a permit; their annual gross sales are capped at $50,000. The law has only been implemented in one county so far, Riverside. In Alameda County, many home kitchen operations have proliferated during the pandemic without the option to get proper permitting, leading to the health department cracking down on some.

Solano County is one of the furthest along in the Bay Area, even though the coronavirus pandemic caused officials to delay in-home inspections and permitting until shelter-at-home orders are lifted. What many people thought would be a short delay has lasted six months – and counting.

For Kistner, a personal chef and caterer on and off for nearly 30 years, that means waiting to expand her business beyond the current small number of carry-out orders she makes for family, friends and clients. She would like to recreate the model of her Philippines restaurant, Bale Ku Café, which means “my house” in her local dialect and is operated out of a home. Her Asian fusion dishes — including japchae, with sweet potato noodles and ribeye steak, and ningnang manuk, a grilled chicken and rice dish — generally cost $25 and feed two to three people.

With so many suffering financially during the pandemic, proponents say there couldn’t be a better time to launch the program.

“There are people who need to work, who want to work,” says Matthew Butler, a Vallejo cook who wants to start a home restaurant business. “This would definitely be a viable option for a lot of people.” 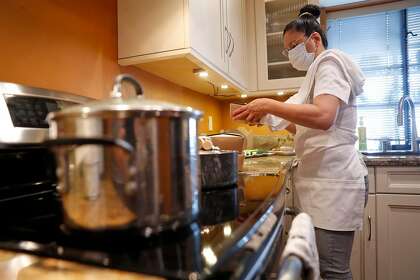 Butler has spent the last 10 or so years catering parties and corporate events after working at restaurants throughout Solano and Contra Costa counties. That all came to a halt once the pandemic hit. While he has found catering work with a chef friend still servicing clients, he envisions creating his own home-based restaurant called Vondi’s, in honor of his late mother, where he would sell his Mediterranean braised beef with garlic mashed potatoes and Korean-style pork chops with bok choy. The only other food options in his neighborhood are fast food and burrito trucks, and he thinks it could represent a new revenue stream, especially with his kids at home distance learning.

To Supervisor Monica Brown, it is this type of caregiver scenario that initially seemed like a perfect fit for AB 626.

“When a constituent came and brought this forward, my first thought was that this is a way for a parent who can stay home, earn money and take care of their family – whatever their family needs might be,” Brown says. “It seemed like a win-win to me.” 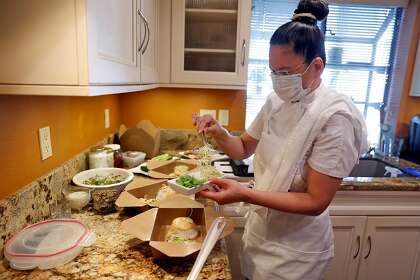 She brought the concept to the board of supervisors around October 2019, making sure that she had the support of another board member to move it forward. Brown worked with a loose coalition of residents and nonprofits to build support for AB 626 in the community. That included Janniece Murray, a retired nursing home kitchen manager known for the “heavenly” desserts she sells during the holidays, and LaDonna Williams, who sold pineapple coconut crunch cakes and West African jollof rice to support herself when she fell on tough times after a divorce.

“To work my way out of homelessness, I actually sold cakes and was able to save up some and put some on the side,” Williams says. “A friend of mine helped me with purchasing the ingredients, so I know that it does work. It can work.”

Murray and Williams coordinated with the COOK Alliance, a nonprofit that helped get AB 626 passed and provided technical assistance, including organizing toolkits and information about how the law is implemented. Meanwhile, the Solano Small Business Development Council pledged public support during the process and will offer business and food safety training to a limited number of participants once the program is running.

They faced opposition over fears that these home kitchen operations – despite a $50,000 cap on gross annual sales – would create unfair competition for restaurants forced to meet higher safety standards. Others worried they would create a nuisance in their largely residential neighborhoods. 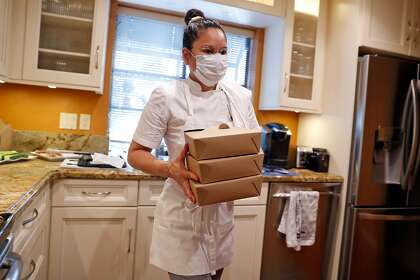 But from tamales to lumpia, barbeque and cakes, people have always sold food out of their homes, Brown and Williams argued.

“Many of us in our neighborhood, which was mostly low income or what they would consider disadvantaged, we always had a house that sold sandwiches and snacks for the kids,” Williams says. “They always had to do it under the radar, but it provided a real necessary service to the community.”

Since the main holdup is inspections, advocates argue the permits could be issued through virtual ones. Riverside County has conducted over 10 virtual inspections during the lock down, says Brent Casey, a program chief and public information officer with the Riverside County Department of Environmental Health. Of those, eight permits were issued, with two pending.

Solano County moved into the less-restrictive red tier on Sept. 22, allowing for some parts of the economy to reopen, including restaurants. But that won’t include in-home inspections, says Jagjinder Sahota, Solano County environmental health manager. In between the pandemic and wildfires, his department hasn’t considered virtual inspections, he added.

“The bottom line is we’re not implementing the program at this point, but we would be ready to go once the restrictions are lifted,” Sahota says.

Akshay Prabhu, the founder of Foodnome, a startup that helps home cooks launch, manage, monetize and market their home kitchen businesses, is among advocates for implementing AB 626 as soon as possible in the county, arguing that it will only make the activities that are already happening in neighborhoods safer. With little marketing, Foodnome has received applications from nearly 100 cooks in Solano County, 10 of which – including Kistner and Butler – are ready to start operating once they receive a permit.

“What permitting home cooks will do is increase the safety in the food industry and allow for increased representation and reduce the barrier of entry, so that the restaurant choices in a community represent the diversity of the community, which I think is really important,” he says.