Easter is ideally timed for gardeners. Just when we need it we have a long weekend to re-engage with the earth, good plants and what we will eat and admire all summer. The prequel has been crazy. Three weeks of warm weather in March accelerated flowers from as far ahead as May.

My winner in this sped-up season is white-flowered Exochorda Snow White, a bigger and better variety of this easy shrub than the widely available one, The Bride. I planted Snow White, hoping the flowers would delight our college undergraduates in late May as they begin to take their final exams in Oxford. It has been in full flower already before they even start their revision.

Here are six top tips to activate Easter gardeners. First up, pruning. Re-emerging garden owners have a way of advancing into their gardens with a pair of secateurs in hand. If you do so, exercise extreme restraint. Very few shrubs need pruning in mid-April and many will resent an attack.

Cut back stems that have just flowered on forsythias: this pruning really encourages flowers next year. Cut back winter-flowering mahonias that have become too tall or straggly: even the old wood will reshoot, so you can be fierce with them.

Leave wisterias alone except for the long wispy thin growths that are dangling inconveniently from older stems. On no account cut those older stems back: they are preparing to flower in a month’s time. Leave roses alone now too. For suitable victims, find your buddleias instead.

Buddleias, flowering in September, should be cut now to a height of only 2ft above ground level. That advice sounds savage, but it will make them shoot profusely and remain firm and well furnished later in the year. This applies only to the ones with long plumes of flower in autumn, beloved by butterflies. Do not treat summer-flowering Buddleia alternifolia in this way. Prune it immediately after it has flowered.

Learn to stagger too: I joke not, as staggering is also essential to my next tip. It is the art of spreading a job at different times in a sequence to prolong the display of a similar type of plant. You can prune buddleias hard until mid-May, so if you stagger the job, pruning one bush now, another in early May, you will also stagger their eventual weeks of beauty. Those pruned first flower first. Those pruned last flower later in September.

The weather is shaping up well for Easter seed-sowing outdoors. The soil is not too dry and the chill is going from the wind. This intelligent outdoor sowing will be especially rewarding because the cost of heating a greenhouse has soared, priming ferocious price rises and shortages in half-hardy bedding plants and vegetables. How can you be sure of summer colour and some affordable cucumbers? The answer is to select and sow outdoors.

I will be sowing my beloved hardy annuals, staggering sowings of them over the next three weeks so as to prolong their eventual season. Blue cornflowers, sky blue love-in-a-mist, scarlet flax, poppies galore and night-scented stocks are wonderfully easy to grow from seeds sown directly into shallow drills outdoors where they are to flower. So are calendulas, the pot marigolds.

Do not bury the seed deeply: if you have a rake, use it to make a shallow drill and then to rake the soil back over it to cover it. Afterwards, water the surface of the soil from a can with a fine metal head, or rose, screwed on to it and repeat this watering if the weather stays dry and the soil turns hard. The seedlings will then appear within three weeks. Thin them out drastically, leaving only one per 6in. You may need to transplant them, digging up their roots, to do so.

Exercise restraint with secateurs. Few shrubs need pruning in mid-April and many will resent an attack

What about home-sown vegetables? Definitely my tip number three. Check out thompson-morgan.com for the full range of outdoor sowable spring vegetables. You are spoiled for choice even if you are limited to a balcony or a window box.

Beans from seed have proliferated recently in very helpful ways. The new dwarf bean, Mascotte, grows to a height of about 9in and is well set with thin, string-free French beans, not thick chunky ones that are much less tasty. Mistic is a true innovation, a dwarf bean whose pods are thin and a trendy purple-blue.

Sowings of all the newer varieties of bean should be staggered across the next six weeks so as to prolong the season’s cropping. Grow these and others in window boxes or big pots.

Cucumbers have moved on too. The important task here is to order seed of varieties that you can start off in May, either in a pot indoors or against a warm wall outdoors away from frost. Wait till mid-May to risk the latter.

I had a good crop from La Diva last year, letting it sprawl up some meshed wire netting outdoors. A major advantage is that its fruits have no seeds and no need for greenhouse protection in order to perform. Sarah Raven offers it too, at £2.95 for 20 seeds, via sarahraven.com. So do Thompson and Morgan, assuring us that the plants are “all female”.

Stories are already circulating that there will be a shortage of cucumbers this summer because of the cost of fuel. Surmount it by growing cucumbers that do not need it.

Surely you will be making an Easter trip to a plant or garden centre. If so, two tips here. The natural reaction is to buy something already looking good. If you do, it will be over in a week or two, leaving you to wait for results until next year. 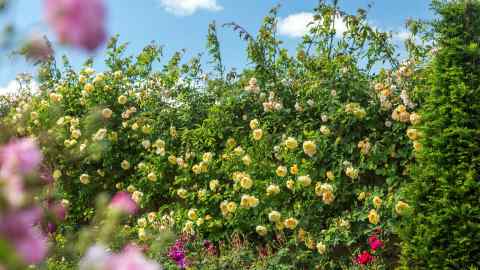 I suggest you check out choisyas in the shrub section. They have had an amazingly good 2022 already, beginning to flower in late January, but there are second or even third flushes of white flower in prospect if you choose well. Look for the excellent choisya White Dazzler in a first-class plant centre as it is smaller than many, about 4ft in all, evergreen and willing to flower again and again, repeating even in late October.

Otherwise, try choisya Aztec Pearl, one with delicate flowers and also a repeating season. Choisyas used to be called semi-hardy but in London especially they are now quite safe. They are fine evergreens that moult their old leaves in May but otherwise are glossy and tidy. When crushed, their leaves smell of gin.

Tip number six? Get down on your hands and knees and hand-weed with a good trowel. Years ago my then teenage daughter Martha watched me weeding like that in mid-November and asked me, before scuttling indoors, how I could possibly enjoy it. I did, and do. Down at soil level, gardeners have their crucial view of the future. Now ennobled in the House of Lords, she has a garden or two herself and is asking very different questions, what she should plant and how she can weed out unwanted water irises. Sceptical non-gardeners convert in the end.