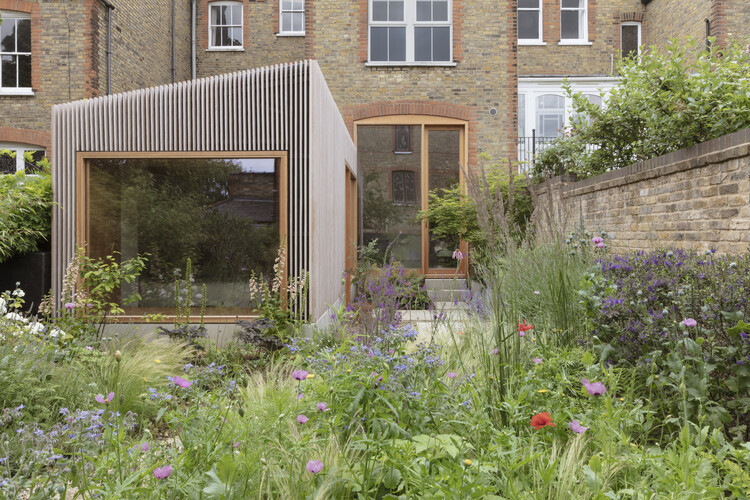 Text description provided by the architects. Shoehorned into the back of a beautiful Edwardian terraced property, the existing studio was entirely unloved and underwhelming. Every inch of the wall was stained orange by cigarette smoke, the single glazing was falling out of its rotten frames and the whole place was uninsulated. This resulted in high levels of damp and extreme black mold. However, there was an opportunity in this property, which lay in its ‘good bones’ and the abundant, overgrown private garden.

The design breathes new life into the existing space. The central hub of the old studio has been transformed into open plan kitchen-living-dining across two levels, making it truly the heart of the home. It forms an L-shaped space, flowing into the new extension, which maximizes the light – crucial to a north-west facing aspect. The inadequate kitchen has been repositioned and replaced with an expansive, cast concrete worktop top above deep Douglas fir plywood units. It is lit from above by a three-meter-long rooflight.

The split level creates a welcome division between the cozy living space and the practical, double-height kitchen. But this sinking of the new floor area was also a necessary step to avoid the extension imposing on neighbors or the treasured view of Alexandra Palace which is protected as part of the Conservation Area. The entire thermal envelope has been upgraded with high-performance double glazing and natural wood fiber insulation, chosen for its breathability, and acoustic and thermal properties. MVHR provides fresh air throughout. This all contributes to the flat’s low energy consumption, calculated at just 1.3 tonnes of CO2 per year.

From the outset, the extension was viewed as a single piece of cabinetry crafted out of a single material – Canadian Douglas fir. The very highest levels of carpentry were achieved with the extension being entirely prefabricated and erected in workshop conditions by a team of highly skilled carpenters in Devon. The extension structure, along with all the doors and windows, was then disassembled, transported, craned in, and erected on-site within a matter of days. This was also vital when working through the pandemic in 2020.

The ambitious scheme increases the footprint by 50% to provide a separate bedroom with the ability to create a second bedroom for family growth. The new bedroom is nestled within the lush planting seen through a vast picture window and secluded bench seat. The Douglas fir ceiling with its exposed beams makes this sleeping area very restful, a feeling which is amplified when it rains, and the light drumming is heard on the roof as though in a tent. The built-in wardrobe which serves the bedroom also acts as a division between the bedroom and the dining room.

Flooding through each room and down each step is a tactile concrete floor that, like a frozen lake, curls and ripples with character. Polishing the screed removes the need for additional floor finishes and was required in either case given the ground conditions. All radiators have been removed in lieu of zoned underfloor heating encased in the concrete screed which acts as a heat sink. The vertical faces of the steps reveal the casting process and is speckled with air holes.

Beside the steps leading into the sunken extension is a smooth concrete column, encasing the steels which support the structure above. The grand proportions of the 3.5m tall window and door in the living space now look onto the extension and the sheltered courtyard. The concrete inside flows outside too, where it forms the upstand of the timber extension, paving slabs, and the wall of the planter on the opposite side.

Shade has been embraced here. Lush ferns and feature Acer trees offer a tranquil, changeable picture to look onto from inside, appreciated at night with discrete up-lighting. Utilizing every bit of space, the garden acts as another room, particularly in summer. The shady courtyard-like space by the extension offers respite from the summer heat, whilst generous seating at the end of the garden basks in it. Garden storage is hidden in a purpose-built Douglas fir bench and barbecue station. Rainfall is captured from the new extension and redirected to the garden via perforated drains and a soakaway to meet the watering needs of the plants.

The garden has been leveled and landscaped, with a careful balance between wildlife and socializing at its heart. Hints of the old property can still be seen from the outside, including the arch of the old back doors, retained to match the rest of the terrace. Even three metal water tanks that were dug up during the extension excavations (done by the clients during the first lockdown in 2020) have been lovingly repurposed as seating and planters in the garden; a nod to the history of the house.