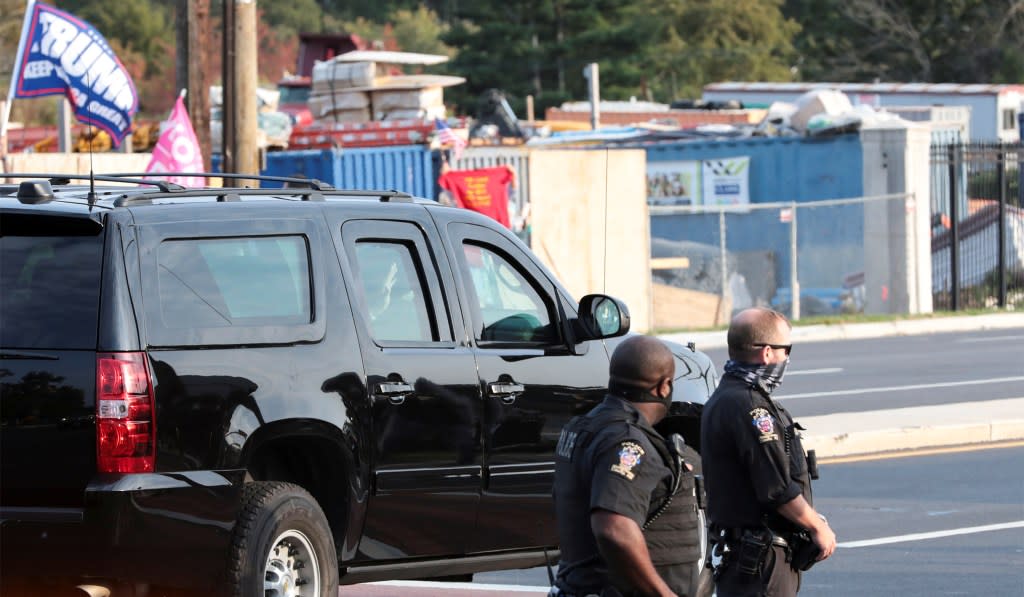 The White House is defending President Trump’s decision to briefly leave Walter Reed National Military Medical Center on Sunday — despite his coronavirus diagnosis — to wave to his supporters from an SUV, saying his medical team had cleared the activity “as safe.”

“Appropriate precautions were taken in the execution of this movement to protect the President and all those supporting it, including PPE,” White House spokesman Judd Deere said in a statement late Sunday.

“The movement was cleared by the medical team as safe to do,” he added.

Trump’s brief drive-by, during which he wore a mask and was seated in a sealed Chevy Suburban along with two people in face coverings, drew the ire of critics and some medical professionals who accused the president of putting others’ health at risk for the sake of political theater.

“This is insanity,” said Dr. James P. Phillips, an attending physician at Walter Reed, in a tweet. “Every single person in the vehicle during that completely unnecessary presidential ‘drive-by’ just now has to be quarantined for 14 days. They might get sick. They may die,” the doctor wrote. “For political theater. Commanded by Trump to put their lives at risk for theater.”

“In the hospital when we go into close contact with a COVID patient we dress in full PPE: Gown, gloves, N95, eye protection, hat,” Reiner wrote on Twitter. “This is the height of irresponsibility.”

It is not recommended that people with the virus travel, according to the Centers for Disease Control and Prevention.

“In general, transport and movement of a patient with suspected or confirmed SARS-CoV-2 infection outside of their room should be limited to medically essential purposes,” the CDC has said.

Prior to his drive, the president released a video saying he had a “surprise” for supporters who had camped outside the hospital.

“I also think we’re gonna pay a little surprise to some of the great patriots that we have out on the street,” said Trump in the video, published to Twitter. “They’ve been out there for a long time and they’ve got Trump flags and they love our country.”

In the video, the president called his experience with COVID-19 a “very interesting journey.”

“I learned a lot about COVID. I learned it by really going to school. This is the real school. This isn’t the ‘Let’s read the book’ school,” he said. “I get it. I understand it, and it’s a very interesting thing, and I’m going to be letting you know about it.”

Following his short drive, Trump returned to the hospital, where he has been since Friday.

Earlier on Sunday, the president’s medical team said that he could be discharged to the White House as soon as Monday.

The one way to make your home feel put together

How to Perfect the Art of Going to the Bathroom Outdoors