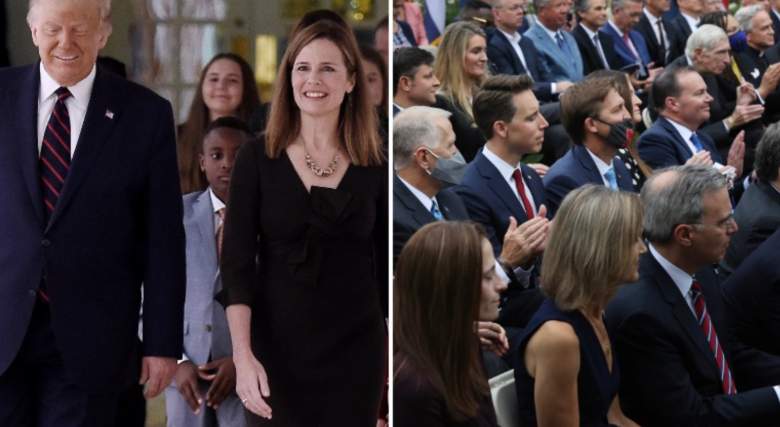 It appears that the Rose Garden event to honor Judge Amy Coney Barrett as the next potential Supreme Court Justice might have led to the spread of coronavirus among numerous politicians, including the president himself.

The White House has not released a statement acknowledging the rising speculation that the Rose Garden ceremony for Barrett became a super spreader event for COVID-19.

Here’s what you need to know:

Well, it’s looking like the Amy Coney Barrett announcement in the Rose Garden was the COVID super spreader event.

Above is a video of people shaking hands, hugging, and walking around massless at the Rose Garden event to honor Barrett’s nomination to the Supreme Court. According to ABC News, at least five people (including those mentioned above) have announced publicly that they have a positive test for COVID-19. That number could rise substantially in the days to come.

Here he is not wearing a mask at Amy Coney Barrett’s Rose Garden announcement on Saturday. pic.twitter.com/1Fgr84DY4k

Danielle Arceneaux, a professional contact tracer, tweeted a breakdown of how the Rose Garden might very well have been a super spreader event, based on the timeline of these positive test results. She wrote,

”Based on publicly available knowledge, I’m going to attempt to trace this WH outbreak, working off the assumption that there was a positive case at the Rose Garden SCOTUS ceremony. Ceremony was held 9/26.  Just SOME of the people in attendance included:  Mike Lee, Mike Crapo, Ben Sasse, Thomas Tillis, Josh Hawley, Chris Christie, Mark Meadows, Hope Hicks, Wililam Barr and more. COVID has an incubation period of 2-14 days, with an average of 5 days.  Hope Hicks started showing symptoms on Wednesday 10/7.. DAY FIVE.  You can spread the virus 2 days before you start to feel unwell. The day you first show symptoms is when you are most contagious.

What was Hope Hicks doing on her most contagious day? Flying in AirForce One, Marine One, and at a Trump rally. In the two days prior, while she was likely infectious, she was doing debate prep and at the debate without a mask…This means that anyone in contact with Hope Hicks or anyone part of this possible cluster could test positive through October 10th from this single event alone.  No one who attended the SCOTUS Rose Garden ceremony is out of the woods until Oct 10[.]”

Notre Dame President on the Rose Garden Event: ‘I Regret My Error of Judgment’

As of Friday afternoon, Notre Dame President Jenkins is the only person who has directly acknowledged the connection between his positive test result and his behavior at the Rose Garden ceremony. In a statement, he said in part, “I regret my error of judgment in not wearing a mask during the ceremony and by shaking hands with a number of people in the Rose Garden.”

Jenkins continued, “I failed to lead by example, at a time when I’ve asked everyone else in the Notre Dame community to do. I especially regret my mistake in light of the sacrifices made on a daily basis by many, particularly our students, in adjusting their lives to observe our health protocols.”

House approves measure condemning QAnon, but 17 Republicans vote against it

Community garden provides refugees with support and comfort through pandemic