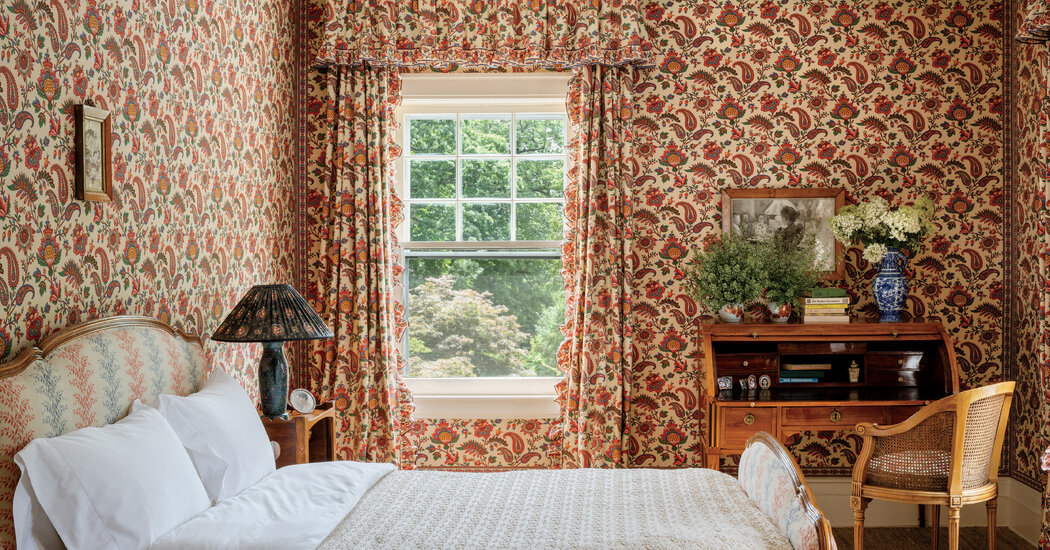 THE TEXTILE DESIGNER Nathalie Farman-Farma was a studious 16-year-old in 1984 when her French-born father’s new banking job in Manhattan required moving the family from the elegant western Parisian suburb of Le Vésinet to what might be its stateside equivalent: Greenwich, Conn. Her mother, Eleanor, who met her father, Jean-Paul, while they were students at Stanford University, had grown up in Northern California as a daughter of William Hewlett, the co-founder of Hewlett-Packard, and settled on their new town a bit randomly; she sent a letter to The New York Times asking where the best public schools could be found in America and received a list in response.

Greenwich was a bit sleepier then, says Farman-Farma, now 52. The town, a 30-mile drive northeast of Manhattan, was full of Federal-style homes Edith Wharton would have recognized, such as the 6,960-square-foot, three-story 1892 house into which Farman-Farma’s parents settled their four children. They kept the outside white and the shutters dark green, and while they brought in a few family antiques and a good rug or two, they never updated the house with the latest kitchen gadgetry or decorating trends. Kids and dogs were free to gambol through the large parlors and 11 modestly sized bedrooms upstairs, and there were lots of books to read on the pillared porch.

After studying classics in college, Farman-Farma worked as an editor at The New Yorker and, in 2000, married Amir Farman-Farma, now 56, a financier from a royal Iranian family. Today, the couple lives in London with their two teenage children, in a Chelsea townhouse from which she also runs the design studio of her five-year-old textile line, Décors Barbares. (Her first book, “Décors Barbares: The Enchanting Interiors of Nathalie Farman-Farma,” was published last month.) But her mother, now in her 70s (her father died in 2005), continues to live in the Greenwich house, as bulldozers raze neighboring properties of similar vintage to make way for vast neo-Norman compounds.

While the house, on a promontory that overlooks Long Island Sound, is hardly au courant, Farman-Farma has nonetheless helped it evolve: Over the years, she has reimagined the interiors as a reflection of her peripatetic personal history and her well-researched ethnographic obsessions. With references that careen from Russian fairy tales and Uzbek ceramics to the rustic cabins of the Sierra Nevada and the soignée interiors of the World War II-era Parisian decorator Madeleine Castaing, Farman-Farma’s aesthetic catholicism melds seamlessly with the house’s East Coast establishment origins. As she did with her mother’s family property on Lake Tahoe and her own early 19th-century London residence and office, she has created a living laboratory for her layered taste. In a design era that favors vast glass walls and near empty rooms, Farman-Farma’s ethos seems as anachronistic as the Greenwich house itself. “Obviously,” she says, on a late summer afternoon, perched in a crosshatched wicker armchair covered in her black-background Sarafane fabric beside an ottoman draped in an embroidered antique fabric from India, “I don’t have much interest in the modern or the minimal.”

IT WAS WHARTON, a pioneer of design writing as well as a novelist, who believed that interiors are more than just the spaces where a novel happens to unfold: They create us. From Lily Bart trapped in the dour Victorian bedroom of her aunt’s townhome in “The House of Mirth” (1905) to the antiheroine Undine Spragg in “The Custom of the Country” (1913) pulling herself up the social ladder via the progressively glitzier real estate of successive husbands, decoration was, to Wharton, the true, if sometimes etched, mirror of the soul.

One thinks of that lesson in the rooms of the Greenwich house, which are rich in history — of the property itself and of the cultures with which Farman-Farma has become entwined. Growing up, she spent lots of time with her father’s sisters, in “very Proustian” domiciles, learning to share her aunts’ love of neo-Classical Empire furnishings in bibelot-arrayed rooms. In her early 20s, she became enamored of Castaing, the Parisian antiques dealer who created whimsical interiors for the poet and artist Jean Cocteau and the film director Roger Vadim in the 1950s and ’60s. Castaing’s rooms, characterized by what Farman-Farma calls “daring nostalgia,” with trompe l’oeil moldings, dark-hued chintz and leopard-print carpets, provided a template for mixing patterns and eras.

But it wasn’t only French aesthetics that inspired Farman-Farma. As a child, her Russian babysitter introduced her to turn-of-the-20th-century children’s tales illustrated by the Russian artist Ivan Bilibin, who also designed sets for the Ballets Russes. He trekked to the far north of the country to learn about fabrics and Slavic design treatments that he incorporated into his Art Nouveau-influenced illustrations.

In a similar way, Farman-Farma eventually found herself immersed in the culture’s folklore, as well as its traditional clothing, including the sarafan (a sweeping jumper sometimes embroidered with gold or silver threads) and the poneva (a patterned, gathered skirt worn over a long, loosefitting shirt). Farman-Farma’s own look is likewise built around such pieces, in lightweight linen and cotton, embellished with delicate ribboning and pin tucks. She buys the garments at auction; in a guest room in Greenwich, its walls and drapes made from her Zénaide pattern — an intricate paisley-and-floral calico inspired by a fragment of an Uzbek caftan — three recent purchases hang on a 19th-century hatrack.

After she married into the Qajar tribe, which ruled Iran from late 1794 till 1925, she also became obsessed with textiles from ancient Persia and the Caucasus. (“Marrying an Iranian changed my center of gravity,” she says.) In the Greenwich house, there is a deep red Turkmen rug that once belonged to her French grandparents; it carpets the book-lined, 18-by-13-foot chamber still referred to as her father’s study. Such floor coverings, with their octagonal rosette pattern derived from nomadic Sunni Muslim tribes, were the height of Russian Orientalist style, brought to St. Petersburg and Moscow starting in the 1860s, from newly colonized cities including Tashkent and Samarkand and soon finding their way into genteel European homes.

The rug is also significant because Farman-Farma’s husband is of Turkmen ancestry. This confluence — of her interests and Amir’s family history — has also informed her business: Recently, she created textiles inspired by Uzbek-style porcelain platters made for export in the early 20th century in Czarist factories, bound for homes in Central Asia. The couple discovered them by chance while scouring antique shops and the internet for Russian-manufactured china created for the Iranian market, decorated with portraits of the shahs who were Amir’s ancestors.

The Uzbek-style plates, 10 to 14 inches in diameter and each wildly different, have a crude, arresting graphic signature with floral designs in coral, deep violet and chartreuse that mimic the blurry resistance-dyed edges of ikat textiles. Perhaps only Farman-Farma would think to hang an array of them in the dining room of a proper colonial, atop an intense botanical wallpaper near a table draped in an Uzbek fabric. But it is those juxtapositions that make the house feel like it belongs to a land that exists only in her imagination. “I like a home where everything isn’t obvious,” she says. “Somewhere that you feel at ease, but also somewhere that has secrets.”

3 Tips to Decorate Your Kitchen on a Budget 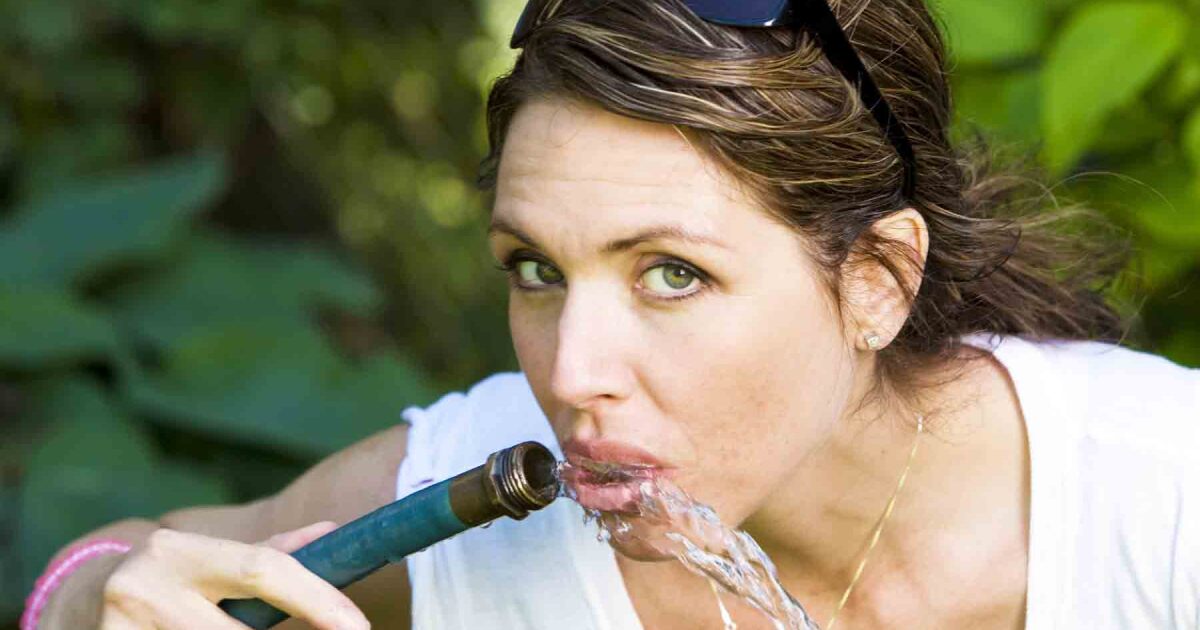