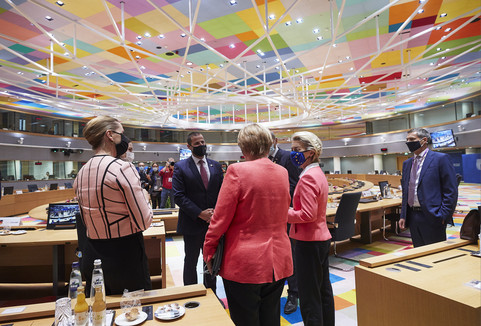 The top name on the list was Belarusian interior minister Yuri Karaeu, whom the EU accused of orchestrating “arbitrary arrests and ill‐treatment, including torture, of peaceful demonstrators as well as intimidation and violence against journalists”.

It designated 25 other security, police, and intelligence chiefs for similar reasons.

It also listed 14 officials responsible for “misconduct of the 2020 presidential electoral process, its non-compliance with basic international standards of fairness and transparency”.

However, the blacklist fell far short of measures that the EU applied after a previous Belarusian crackdown in 2010.

Those covered Belarusian president Alexander Lukashenko as well as top oligarchs said to be bankrolling his regime.

But German chancellor Angela Merkel welcomed the move anyway at a summit in Brussels on Friday.

“That we could now agree to those sanctions is an important signal, because it strengthens the hand of those who are protesting for freedom of opinion in Belarus,” she said.

Josep Borrell, the EU foreign relations chief, echoed her, saying: “We hope these sanctions will encourage the Belarusian leadership to refrain from further violence [and] to free all the unlawfully-detained people”.

“The EU is ready to impose additional restrictive measures if the situation does not improve,” he added.

The Belarus decision had turned into a test of EU foreign policy, after Cyprus vetoed it on the grounds that it wanted similar Turkey sanctions at the same time.

But in the end, Cyprus backed down in return for more EU tough talk on Turkey’s recent naval incursions into Cypriot and Greek waters.

“In case of renewed [Turkish] unilateral actions or provocations … the EU will use all the instruments and options at its disposal,” EU leaders warned.

For their part, Cypriot president Nikos Anastasiadis and Greek prime minister Kyriakos Mitsotakis said they were “absolutely satisfied” by the EU pledge.

EU leaders also urged Armenia and Azerbaijan to call a ceasefire after one week of intense fighting over the Nagorno-Karabakh region in Azerbaijan.

And EU Council president Charles Michel said “external interference” in the conflict was “unacceptable” after France, on Thursday, accused Turkey of sending Syrian “jihadists” to fight on the side of its Azeri ally.

For its part, Belarus previously threatened to impose counter-sanctions if the EU went ahead, including expulsions of European journalists.

They spoke of “the modernisation of the [EU-Turkey] Customs Union and trade facilitation, people-to-people contacts, high-level dialogues, [and] continued cooperation on migration issues”.

“While there were some positive elements in the decisions regarding our country, many areas were divorced from realities,” the Turkish foreign ministry said in response.

Turkey also called for the creation of a “mechanism” to share oil and gas resources between Cyprus and Turkish-occupied northern Cyprus.

“As long as this is not achieved, the Turkish-Cypriot side will continue with its hydrocarbon activities by means of [Turkish energy company] TPAO,” Turkey said.